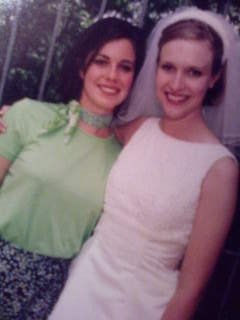 Sweetpea's picture of us from her wedding on Making Art Together reminded me of this picture. It was taken May 24, 1997. I didn't even meet Sweetpea until after I was engaged, but I remember thinking it was weird she wasn't in my wedding. I remember loving her outfit. It had a white jacket that she wore with it. She probably had taken it off because my reception was outside on one of the muggiest, humid days I can remember. Sweat was running down my legs under my dress. 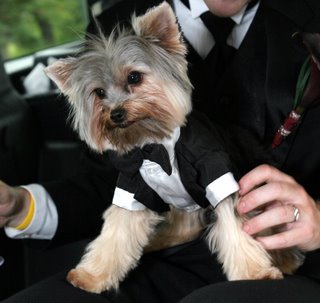 This little guy was at the last wedding that I shot. He's wearing a tuxedo!!! 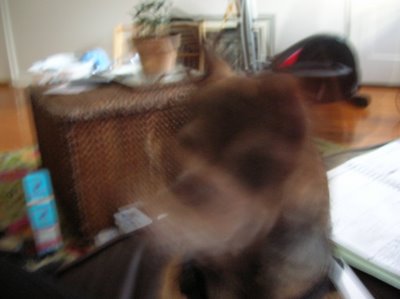 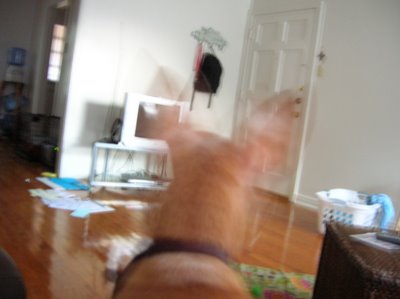 my little friends are gone. it all started when we thought we were going to move(another story--we're not moving--it's good) anyway, most apartments demand at least 300.00 for both dogs as a non-refundable deposit. realizing we've already spent double that on various pet deposits, we decided that care for our little companions was becoming a little beyond our budget. we're teachers, guys. we save up to go to the dentist. it just so happens that the sweet family we got them from was really missing them (i could tell) so i asked if they might be interested in taking them in.....they had given them to us several years ago b/c their children were really too young to know how hold/play with these fragile guys. the family was super excited and took them back.....we didn't end up moving, but we hope to have a family sometime in the relatively near future, and these dogs really aren't young- child-friendly....we are all happy with the situation, but you know, i MISS those silly little dogs.

The pope recently paid tribute to Sister Leonella, the nun (serving poor children in Somalia) who was murdered during the "pope rage" violence:


...... in today's liturgy, is the Letter of St. James: "Where jealousy and selfish ambition exist, there is disorder and every foul practice. But the wisdom from above is first of all pure, then peaceable, gentle, compliant, full of mercy and good fruits, without inconstancy or insincerity." The apostle concludes: "A fruit of righteousness is sown in peace for those who cultivate peace" (3:16-18).

This word brings to mind the witness of so many Christians who, with humility and in silence, spend their life at the service of others for the sake of the Lord Jesus, working concretely as servants of love and therefore "artisans" of peace. Some are asked to give the supreme testimony of blood, as happened a few days ago to the Italian religious, Sister Leonella Sgorbati, who fell victim to violence. This nun, who for many years served the poor and the children in Somalia, died pronouncing the word "pardon": This is the most authentic Christian witness, a peaceful sign of contradiction which shows the victory of love over hate and evil.

In other news stories, her response has been translated as "I forgive." 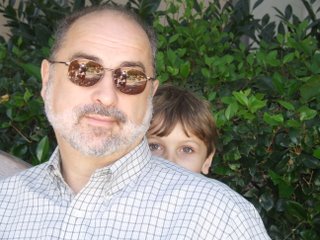 Stephen is in a class this semester (at M.I.T.) in which the project is to design a house for U2's guitarist David Evans (aka: Edge or "the Edge"). He's leaving next week for Malibu, California to do research and check out the property. It's an actual project that his professor is working on.

Cool, huh? One of Stephen's dreams is to work with Bono on a project someday... 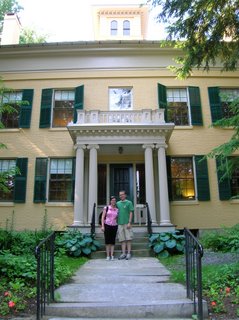 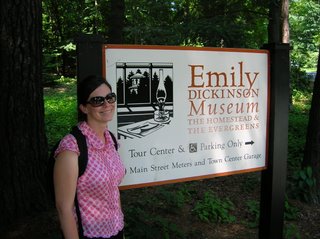 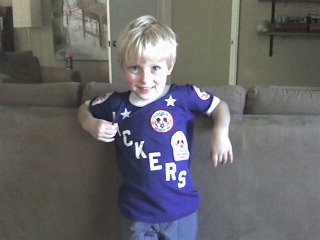 We just cleaned out our garage and it was very therapeutic! We found all sorts of treasures including notes from middle school friends (hilarious) and old pictures (even more hilarious). We even found some sweet letters from Adrienne.

Andrew looked through his memory box and found some old soccer jerseys, which seem to fit Ethan perfectly!!

I didn't know this was possible.

TulipGirl's husband's two blogs, one of them a blog about Islam, were hacked by Turkish muslims.....very interesting....

This past Monday I saw my Naturopathic Physician and she had my test results. The tests showed that my Adrenal Gland system is creating less than half of the amount of epinephrine I need in a day. The epinephrine thus affects my norepinephrine and to make things short I have no adrenaline. In other words I have no 'get-up and go'. My serotonin levels are low which contributes to me feeling sad. And finally this chemical which I cannot remember the name of is high basically giving me lots of 'nervous energy'. Her analogy for me is that I am trying to drive a car whith my foot on the gas with no fuel or oil in the gears.

So, I've just started 2 amino acids and a herbal supplement plus primrose oil. and apparently I have to include time in there.

I've also started counseling, which is good, but sooo hard.

So there's my update. It's hard to blog these days when dropping a comment is easier for me. I would like to blog about adoption and homeschooling soon though.

I went to my ultrasound appointment today and ovaries and uterus look healthy and normal! That's always good to hear. Thanks for your prayers.

My help must come from Thee.

My help must come from Thee.

I am scheduled for an ultrasound this thursday because my doctor is concerned that my right ovary is larger than normal. Could be nothing...could definitely be something...

Strangely enough I've had an ultrasound before when a crazy doctor was unnecessarily concerned about cysts in my breasts.

I'll let you know how it goes on thursday...

Praying for and Thinking of those who lost so much....

we feel our hearts drawn toward adoption......wondering when, wanting it to be sooner rather than later.

international? then again----there are so many children here stuck in the foster system. what can we handle? what is wise?

praying alot and seeking counsel.....please pray for us.

I didn't lose anyone on 9/11/01, but I get extremely emotional when I see documentaries, movies, etc. about the day. I don't always watch them, but sometimes I do. (The documentary made by the french filmmakers was really powerful for me.) I'm wondering how y'all are choosing to respond to the abundance of media attention on this approaching fifth anniversary. (For example, CNN is replaying their entire coverage of that day online in real time.)

And for those of you who may have lost loved ones, how do you respond to the fifth anniversary of that terrible day?

I really enjoyed reading Sarah's post from a few days ago.

Of lawsuits and neti pots. 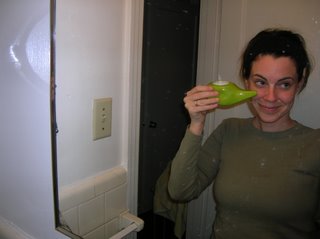 here's the update. We've had several people (attorney, insurance agent)tell us that they think our landlord may be right--she is not liable for our ceiling crashing down, since there was no sign anything was wrong beforehand. The attorney said it would be a toss-up in court. (Not that we were planning to go to court.)

In other news, our things, once cleaned up, were not as badly damaged as we first thought! So we're cutting our losses and not going to claim our renter's ins. Our ceiling has been fixed, and we just got back in the apartment. Planning on moving out at the end of the month. Till then, we're going to buy an air purifier and use the neti pot a lot. :)

hey, friends, we have a couple of promising possibilities of places to move. They are actually even a bit closer to work for M. and they are affordable. Would you pray for us that one of the units would be open? I'm still waiting to hear back.....I've told our landlord that we'll be moving out.....when, I'm not sure. It all depends on what is available. Obviously, we don't want to jump into anything we're not sure of.

We have been so blessed by family and friends this week....I think 5 different families from church offered us a place to stay.....we are humbled by the kindness we have received! Thank you very much!!

I also feel a need to apologize for the bitter tone of my last post. Actually I already deleted the most bitter part...... My friend Kate graciously says that I am "justice-oriented." I think that's a nice way of saying that I hit the ceiling (pun, heh-heh) when I feel like I've been wronged. Asking God to help me with that.