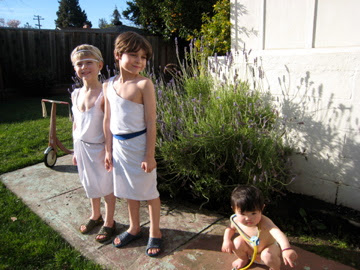 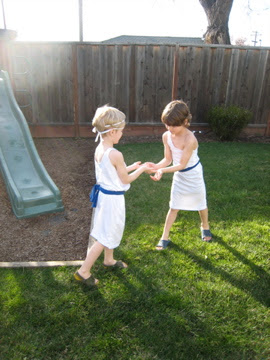 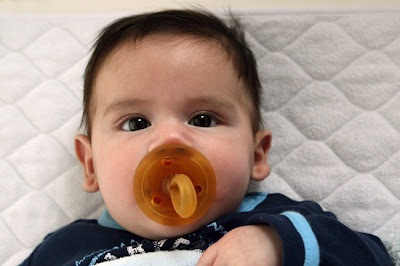 Look who has a new BPA free pacifier!! Thank you, Natursutten!!
I was worried he wouldn't like it because he loves the Avent ones so much, but so far so good! 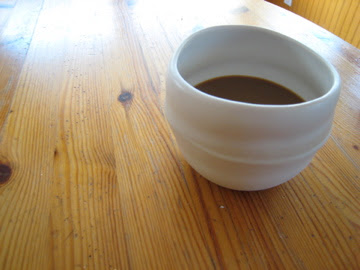 My girlfriend gave me a birthday present yesterday. My b-day was the 12th. She gave me this exquisite cup from White Forest Pottery. I love how it feels in my hands and I love having beautiful things around that you actually use. I love that it is imperfect and beautiful at the same time. I love that you can see evidence of the potter and that the evidence hasn't been smoothed away.

I love my birthday present.

I was going to post this great video someone sent me of a baby laughing. It cracks me up every time I watch it....but today I noticed that there was a website advertised in the bottom corner throughout the video...so I checked on it... I'm sorry to say it was a p**nography site. Man, that sort of thing makes me so angry and sad! Just thought I'd give y'all a heads up on "cute" emails or videos you receive...

...glass baby bottles, that is. Here are some super cool, possibly less breakable, and really quite expensive ones!!!

about plastics in general---it's fairly long, but fascinating. Also gets into the hormonal impact of plastics.....and no, I'm not suggesting that plastic is all bad. But seriously, read the article.

On land [article had been discussing sea pollution], things are equally gruesome. “Fertility rates have been declining for quite some time now, and exposure to synthetic estrogen—especially from the chemicals found in plastic products—can have an adverse effect,” says Marc Goldstein, M.D., director of the Cornell Institute for Repro-ductive Medicine. Dr. Goldstein also notes that pregnant women are particularly vulnerable: “Prenatal exposure, even in very low doses, can cause irreversible damage in an unborn baby’s reproductive organs.”

And after the baby is born, he or she is hardly out of the woods. Frederick vom Saal, Ph.D., a professor at the University of Missouri at Columbia who specifically studies estrogenic chemicals in plastics, warns parents to “steer clear of polycarbonate baby bottles. They’re particularly dangerous for newborns, whose brains, immune systems, and gonads are still developing.” Dr. vom Saal’s research spurred him to throw out every polycarbonate plastic item in his house, and to stop buying plastic-wrapped food and canned goods (cans are plastic-lined) at the grocery store. “We now know that BPA causes prostate cancer in mice and rats, and abnormalities in the prostate’s stem cell, which is the cell implicated in human prostate cancer,” he says. “That’s enough to scare the hell out of me.” At Tufts University, Ana M. Soto, M.D., a professor of anatomy and cellular biology, has also found connections between these chemicals and breast cancer.


** I just realized that the plastic bottles we store water in must not be polycarbonate. I can't remember what they're called--will try to find out.

Does anyone know about BPA-- toxic chemicals used to make plastic hard or soft? I've only read a little and it's a bit alarming. Since baby is bottle fed we switched to Born Free bottles a couple of weeks ago and we're really happy with them. Just wondered if anyone has read or knows more about it.

This site seems to be a good starting place for those of us that feel we're out of the loop. : ) 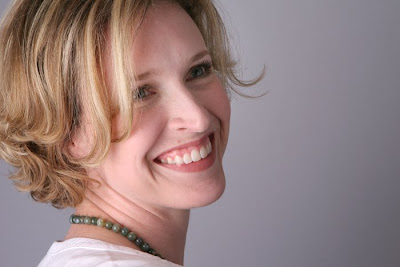 We love you, Liz and we're so happy that your family is finally all together!!!! Hope you're having a lovely day... 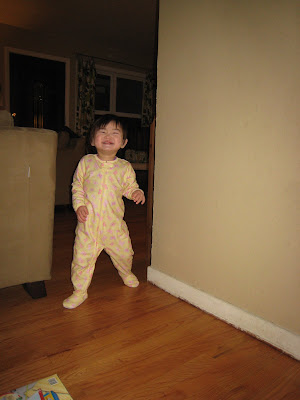 I just wanted to let all of you know that I'm still here. I am sleep deprived and am pretty much running on coffee and sugar.

I just read through several posts worth of comments and I wanted to thank everyone for following our adoption blog and loving us even though you don't know us. I loved seeing the comments everyday in China. They were a constant encouragement during some difficult days. The trip probably isn't what I had fantasized about. Chinese New Year, the severe weather and Sam being sick really made for an intense time, but we are overjoyed to be home with our sweet daughter. It is all so surreal. I prayed and longed for her for so long and now she is just here...poopy diapers and all. * which makes it VERY real*

She likes to dance, eat raisins and sneeze food out of her nose. She can now wave and say "bye", she says "hi" and "mamamama". She is extremely playful and will try to charm us to get out of going to sleep or something else she doesn't want to do. She wanders around the house investigating every nook and cranny. She likes to comb my hair and stick her fingers in my mouth. *I, of course, let her.*

She is cuddly and sweet and likes to bury her head in my neck. She will sometimes even let Daddy give her some tickly kisses.

We are falling in love and I am so thankful that we could share it all with all of you.

I love Sweetpea and WG dearly and am thankful they let me in on their sweet friendship. I'm obsessed with pictures of Sol and long for pictures from Ethiopia.

Even though we are spread across this country, San Fran, Dallas and Boston, I love that this blog can make you feel so close. *mwah*

Hey friends, just to update you-- things are going really well with baby Sól. He's a total joy to be with. I love being his mom...He's almost 13 weeks old now (and over 13lbs!!), he's holding his head up more, he's sleeping in his crib (not in the bassinet anymore), he's sleeping through the night and just this week he started laughing!!!! These are good days... 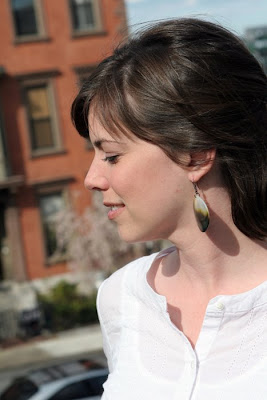 Feliz Cumpleaños to my BFF...Thank you for being such a beautiful friend and person. I hope you have a lovely birthday and many more lovely years to come. I miss you!!!!!!!!!!!

We're all praying your referral comes soon!!! Just think...this time next year you'll be a mom!

the setting: sweetpea and sweetpea's husband enjoy a daytrip out to an tiny island which is also a bird sanctuary. the weather: Mexican-sun-sweltering. sweetpea is not half-naked like everyone else--she has the day before proven herself to be not-a-good-sunbather and has broken out in a full body sunrash. Thus she has desperately outfitted herself in white clothing in an attempt to neither die of sun poisoning nor heat exhaustion. (Rash must not be exposed to sun, and this proves to be difficult, since sweetpea is in the Carribean.) Our guides, having hooked fish off the side of the boat on the trip over, have laid out a delicious spread: fresh guac, fresh pico, and a huge fish, seasoned and grilled. All participants have just finished stuffing their hungry mouths and slugging down the last of the cerveza and orange Fanta.

the action: sweetpea, fascinated by the crackling sound of some kind of freaky million-crab-march migration, fires up the Nikon. Realizes a few seconds later that a gigantic iguana broods a few feet from the crab craziness. Nonchalantly backs up to include giant lizard in the shot, as if it were intended to be a part all along. As the shot winds down, cool, hip, jiggly-camera work is utilized, allowing viewer a sense of the full setting. *Please also note--the ultra-white husband (also developing sunrash on his chest and back.) Shot ends with a provocative glimpse of fish carcass.