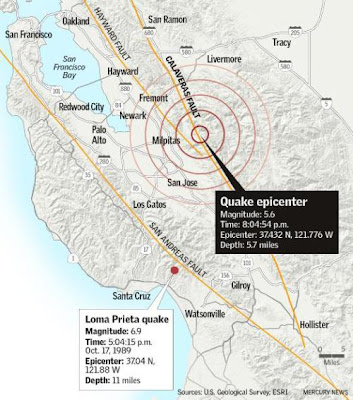 Well, after living here 5 years I have become an official Californian. I have survived an Earthquake. ** Ok we all did, but it felt HUGE to me**Last night right after 8pm I was at a friends house checking out her baby clothes for Mei. All of a sudden, I heard this rumbling. My first thought was that her husband had arrived home and was opening the garage door. But the rumbling got louder and I could feel it in my feet. I was hilariously slow on the uptake and still did not get what was going on, so my friend spelled it out for me by yelling, "Its an earthquake!" She runs to the kitchen doorway as I feel the floor bumping up and down beneath me and then swaying from side to side! I finally make it to her and basically grip on to her arm. At some point, she asks, "Is this your first??" I think the look of sheer panic gave her my answer. The whole thing lasted roughly 15 seconds. Cell phones were tied up immediately.

This is the largest quake since the devastating Loma Prieta earthquake. So it is significant. They have recorded 30 aftershocks throughout the night, but thankfully, they are too small to feel.

Andrew was home with the boys. Sam's evaluation was that it was "incredible." He layed on his top bunk and watched all his 'treasures' bounce around on his shelves. Ethan said it was a "superduper ride!!"

By the way, if you look at the map and find the word San Jose. We basically live right above the 'S'. 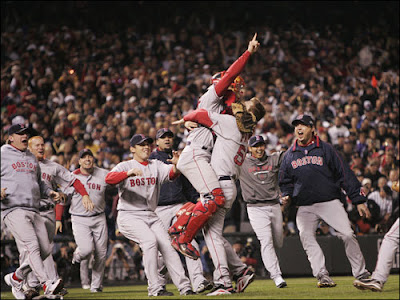 The Boston Red Sox won the world series last night against the Colorado Rockies. It was a 4 game sweep and Bostonians are on a serious high this morning. The celebrating in the streets last night went into the early morning hours. I watched safely and warmly from my tv at home.

A local furniture store had a promotion this summer for free furniture if the red sox won the world series. Furniture purchased from their store during their 5-week promotion would be fully rebated if the red sox won. Around 30,000 people took a chance on their deal and will now have their furniture for free. Crazy, huh? 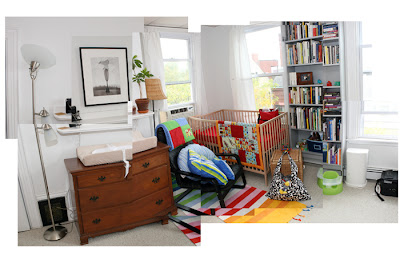 Lizard asked to see our baby space, so here it is. The second half of the room is still reserved for our office. We can't really afford to use the whole room for baby. We only have 800sq. ft of our little apartment to work with right now. =)

My weekly checkup went well yesterday. The midwife said that baby's around 7lbs already. So, I'm ready and just waiting...

I Love Boston in the Fall... 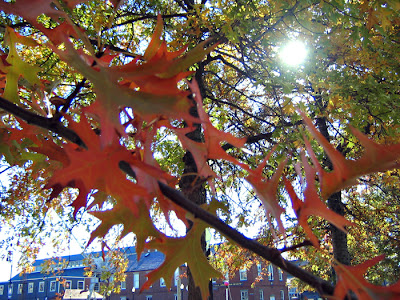 October is such a wonderful month in New England. If you've never been put it on your to-do list. It's totally worth it to go leaf-peeping, apple-picking and catch a Red Sox game at Fenway. Chances are you'll need a sweater or light jacket and that's fun, too.

Completely unrelated: I had three hours of relatively painful contractions yesterday and I thought, "oh boy...here we go." Turned out to be a false alarm. There was no consistency to the contractions and then after 3 hours they almost completely disappeared. Guess my uterus was just having a dress rehearsal. 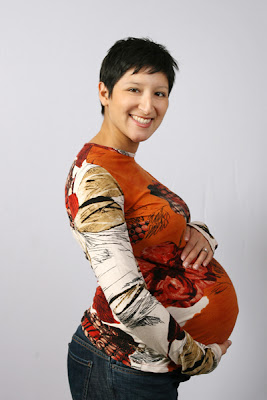 Only a few weeks left. I'm kind of ready for baby to come out and play. =) I'm wrapping up my photo work and spending my evenings sewing last minute projects. Everywhere I go I get the same reaction--"That's going to be a big baby!" Hmmmm. What do they mean by big? Not exactly what I want to hear as I'm hoping to labor sans drugs...

I'm taking a breastfeeding class on Saturday at the hospital. I'm looking forward to it.

In the photo I'm wearing one of my favorite maternity shirts (it's one of the ones loaned to me by Kellsey. Thanks, Kellsey!). I get compliments on it every time I wear it and it's one of the only few that is long enough to cover my enormous belly.

Sam and His Daddy 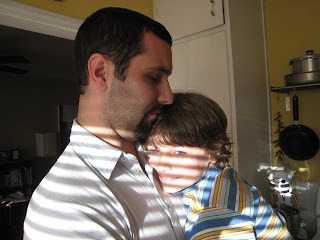 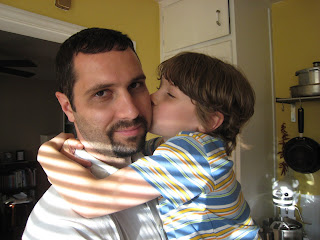 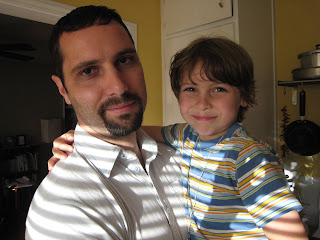 You know you live in California when... 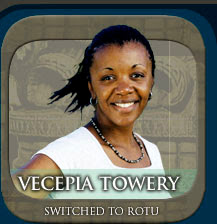 your Administrative Assistant is the 4th season winner of Survivor. Y'all I am not kidding.

My DH began his new job yesterday and he mentioned his assistants name and how he liked it.

Today while she was doing his orientation she told him her life story. How she won the 4th season of survivor, how her nephew is the Dallas Cowboys player Roy Williams, how her little boy is on the new show Carpoolers, how she is a Christian and where she goes to church. To say the least Andrew was a little blown away.

So I know Vecepia had to overcome a lot of challenges to win Survivor, but is she up to my husband's horrible spelling? Stay tuned...we will see......

Sometimes you find a blog that is sooo funny and sooo clever that you just have to tell people about it!! Please check out the Bean Bag by Sarah Bean.

I'm 34 weeks pregnant today. I keep thinking, "can my tummy get any bigger?!" and yet it does!

I'm still feeling pretty great overall, but this third trimester has introduced a few new discomforts like heartburn and disrupted sleeping. I can tell the baby's getting bigger and stronger as he can almost kick into my ribs now. It's fun to watch his foot or knee move across my tummy. It's good clean entertainment for friends and family.

I'm in third-trimester maternity wear now. Thanks to all my wonderful friends who loaned me clothes I don't have to go out and buy a whole new wardrobe at this point. At the beginning I didn't fully understand how much longer my shirts would need to be at the end of pregnancy. I keep trying to wear the clothes I've been wearing all summer but now those clothes look like someone dried them too long and they shrunk all around.

I'm really thankful for my wonderful husband who has been a huge support. He's super busy with grad school right now, but he works from home as much as he can and he calls often when he's away. We survived childbirth class last weekend and we feel like we're as ready as we could possibly be without having gone through this before. We're eagerly awaiting our November baby and trying to use this time to rest (me, not busy grad husband) and do things we won't have time to do in a couple of months. 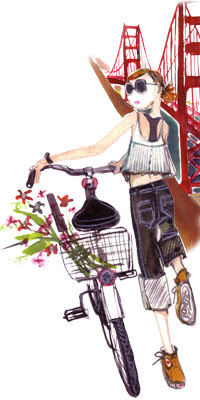 If you were lacking some good websites to waste time in, look no further. I just subscribed to DailyCandy. You will receive a daily email focused on an area like beauty&health, travel, kids, products, etc. What's great is that you can sign up for your local big city edition, so for us its San Francisco. On Monday's I will receive the new Kids edition and on Tuesday the Deals edition. So between DailyCandy, Etsy and blogging we will all be officially wasting tremendous amounts of time!