Please pray for the family of Kyle Lake, pastor of University Baptist Church in Waco, who was electrocuted while performing a baptism yesterday morning---in front of 800 church members. Kyle has a wife, Jen, and three children. I did not know either Kyle or Jen well when I was in school, but they were some of the first people I met when I transferred to Baylor years ago. (They were both friends with my roommates, and were in my apt. all the time.) Both Kyle and Jen were memorably kind to me at that time--when I was new and hadn't made any friends yet. So I am thinking of Jen today, and of her children. Please pray for comfort for them and for all who witnessed such a tragedy.

Okay, if you could just bear with me here--I saw this fun map on someone else's blog...click on the link and it maps out all this blog's readers. You can even upload a picture and send a shoutout. Woo-hoo! http://www.frappr.com/thedailylifeofsweetpea If you people out there would map yourselves, it would make my day. Thanks!!

End of the Week Collapse. 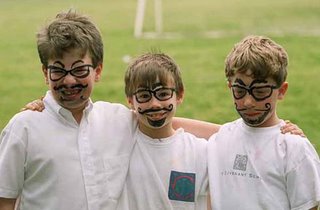 (Above Photo: My Students on Friday Afternoons)


I heard recently that those who become teachers are generally extroverts. Perhaps this is why I do a faceplant in the entryway of my home each day after work....cause, honey, I ain't an extrovert. Especially on Fridays (such as today.) After a week's worth of overseeing picture studies, projects, and cleanup with 200 kids, I can barely complete a coherent sentence, I'm calling students by the wrong names every time I turn around, and I generally just have no more words. I am sucked dry.

This doesn't gel well with my student's Friday afternoon "dance party in the artroom!"mentality.....I love their spirit and life, I just can't keep up sometimes.

Today in nature study we took a short walk to a tree that's currently dropping "helicopter" type seeds....We learned those types of seeds are called "keys." I think the tree was some sort of maple, but none of us could find the exact type in any our tree ID books. The weather was heavenly for a nature walk--about 70 degrees and sunny. We then painted a leaf and seed from our unidentified maple.

I am on an ongoing mission to reorganize the artroom.

Off to the weekend, 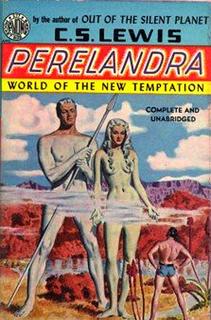 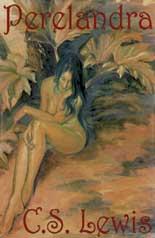 Okay, I admit I have not worked up enough "desire for the sublime" to struggle through Williams right now....Instead, I'm re-reading Perelandra by C.S. Lewis. (Thank you, Kellsey.)

Here are a couple of examples of jacket art for Perelandra. I'm loving the crazy-fifties- Amazon-people image on the left....look at Ransom in his blue swimming briefs! (He's naked in the book.) My favorite is the image on the right. I'd love to have a copy with this particular cover.

My Quest for Environmental Purity

I am allergic, asthmatic, and somewhat environmentally sensitive. I'm not living in plastic bubble yet, but am still definitely sensitive to things many people aren't. For instance, my sweet husband cleans to bathroom, because bathroom cleaners make me sick.

I am not afraid of these things, just sick of how they make me feel. I mean, sometimes if I'm walking thru a cheap clothing store (as in cheap clothing DYES,) I get a headache.

I was thinking the other day about things I've changed/eliminated in order to avoid allergies, headache, etc. I added a few more when I was pregnant, and decided to carry those over into non-preg life.) The list has grown through the years. It kind of makes me laugh-it's happened gradually, and I realized that maybe I've become one of "those" people:

No drycleaning--toxic chemicals, and I hate remembering to drop-off/pick up. Also, expensive.
Unscented deodorant,
shampoo,
skin moisturizer,
and detergent.
No perfume.
No Cheap scented candles.
No nail polish. I read recently that nail enamel was developed from CAR enamel, and yes, we can absorb stuff through our nails.
No haircolor anymore. And you know, I've decided that I like my natural hair!
Non-chemical, mineral-based foundation and powder.
Kitchen cleaners are orange-oil based, or some other non-chemical base.

I know, I'm freaky. But I can function, and functioning's important!!

The Importance of Healthy Bowels

Today I was having trouble with a six-year-old student named J. He wasn't working on his color wheel after much encouragement. Finally I said, "J., why are you STILL not painting?" He started jumping up and down in a desperate sort of way. "The reason I'm not is....I really have to go to the bathroom!!" "J., then go! All you had to do was ask," I say.

A few minutes later he returns. "Wow, I feel a LOT better now." He looks up at me very seriously. "And you know, you really have to get that stuff out of there, because if you don't it can kill you."

Soooo, lately I'm considering returning to my Charles Williams Reader and giving it another go. I tried to read Descent into Hell several times in the past year, but the book kept losing me.....I am generally interested (really interested) in some of William's themes--the supernatural layers of everyday life--and I love the Inklings, so I expected I would enjoy his work. That Hideous Strength by C.S. Lewis is a book I've read and re-read--definitely one of my all-time faves. Some say that T.H.S. is "a Charles Williams novel written by C.S. Lewis;" learning this caused me to be even more interested in Williams. However, I must say that as far as accessiblity/readability, Williams is faaaaar from Lewis. The bits I've read are, without a doubt, the most difficult fiction I've ever encountered. Williams' dense, poetic prose, combined with historical/cultural references I don't always understand, make it frustrating!! because I kind of get it! and I want to get it more! The few times I've really grasped an image or idea from Descent, I found it breathtaking! I love the way he thinks about a physical space (Battle Hill) in terms of the spirit plane. It's fascinating.

Williams also had some wacky theories--wacky but I love 'em. For instance, he theorized that the Christian idea of "bearing one another's burdens" could be taken literally.....As in, one Christian could literally, supernaturally, take on another's pain, be it emotional or physical...... he's definitely interesting.


Has anyone else tried to slog thru Williams?

I've continued the "memory picture" exercise following picture studies. (Mentioned in an earlier post.) It's going well--I feel like it's a great way to solidify the details of a painting in their minds--to internalize it. The only thing is, it's a bit more time-consuming than I thought. The students are so intent on reproducing the image it could easily take them 30 min....(I also think/hope their speed will increase as they get used to doing the sketches. ) In order to have class time for projects, I'm thinking I'll have them do memory pictures every other picture study.

I realize a PHOTO of our garden would be infinitely more helpful than just reading about it.
-sigh- I'm going to ask for a digital camera for Christmas. Anyhow, our wildflower bed is germinating, for which I'm very thankful. We let last year's wildflowers go to seed and shook the dead plants over the bed, hoping the seeds would fall. In theory, this works, but I'd never done it before and was hoping we wouldn't end up with an empty bed in the spring! So some of the plants are germinating, and will survive the winter and take off in the spring! (Others won't germinate until spring itself.)Last year our wildflower bed was incredible; I hope the same happens this spring. Once again, perhaps I will be able to show you a VISUAL.

The lettuce and spinach, etc., we planted haven't come up yet. I am concerned the kids planted the seeds too deep. I guess we'll see....if they fail to come up, it's a great learning experience for the students--"what happens when we don't follow planting directions Mrs. F. is giving us." 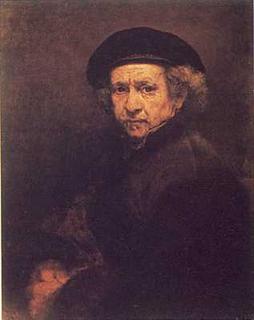 Our new artist. . . .Rembrandt van Rijn. I used this self-portrait to introduce him to my students today. What an amazing face.

Summer is finally over. 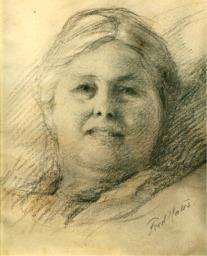 My friends, we've finally had a coldfront worth something. It is actually in the LOW SIXTIES today, which might not sound like much, but after an unusually hot September with several over-100 days, we all feel chilled! Today I made my nature study kids write about the coldfront in their nature journals. Actually, I made them do this outside at the picnic tables so they could feel the weather as they wrote. You would have thought they had icicles hanging from their noses. One sixth-grader began his journal, "We walked out into the biting cold. . . " I had to laugh.

Speaking of nature study, the lower school directer of our school, our curriculum coordinator, and one teacher are in Fredericksburg today at Ambleside School, a purely Charlotte Mason school based on the original Ambleside in England. I look forward to hearing about their experiences there. www.amblesideschools.com is the school's website.

The drawing above is a sketch of Charlotte Mason I found online.

the copying question. My friend Sarah is an ESL teacher and made an interesting point about having her students memorize a bit of Shakespeare. Anyone interested should read her comment on "the question of copying" post.

The thing is, I have my students once a week for an hour. Given that limited amount of time, the fact that picture studies can take up to 30 min., I'm still pretty uncomfortable with the idea of having my students spend the rest of their limited time copying great works..... even though the conversation I've had with you guys has helped solidify the understanding that "imatatio" does have a valuable place in the study of art. However--here's a new thought---The other day I was reading my Charlotte Mason book and it made this suggestion, one I had never read before in any other description of Picture Study. (I don't know how I missed this before, duh.) It suggested that at the end of a picture study session, have the students sketch from memory the work that was just studied---just with pencil and paper, not a full blown project. The idea would be to "take in" the work even further.....Sarah, I think this relates to your Asher Lev example. However, this would be considered more of an exercise, perhaps lasting 15min. or so. In between such picture studies and exercises, a more creative project would be done--inspired by the artist or even a specific work, but with more creative choices to be made. Interestingly, the book (When Children Love to Learn,) which actually suggests this exercise following a P.S., seems to place more emphasis on creative freedom in art class than a purely classical system would, even making a negative comment about copywork-as-art-project. Anyway, the other day I tried the sketch-from-memory exercise with the second-graders following their picture study of Madonna and Child. They really seemed to enjoy it. Maybe incorporating this exercise will be a happy medium between respecting the value of the copying tradition and allowing time for creative choices, too.....hopefully one will inform the other.

I don't have my book with me today or I would quote it directly. Maybe next time!