Only Scoob could tell...

So, as you may have heard we had a teeny, little incident at our zoo. You know the story, Tatiana the tiger escaped and mauled three people killing one of them.

We were at the San Francisco Zoo 4 weeks ago. I LOVE this zoo. I am attached to this zoo. It is so beautiful and spectacular and parts of it are oh, so very.....old. The entire large cats building/cages/enclosures are the originals. It is a beautiful building with classic architecture. But it is old people.

The two survivors aren't talking. The theory is that they were taunting the animal and either helped it out somehow or antagonized it to the point that it got angry enough to climb/jump out of the enclosure. The cafe where the two victims were found is where we buy our chicken nuggets. I cannot imagine how those two guys ran there, in the dark, knowing a Tiger was chasing them. It isn't a direct shot from the enclosure to the cafe actually. Terror!!

Sam has a Scooby Doo theory that the boys were set up by the Zoo director, because he wanted more money. He wants to go investigate and I said no way, until we know its safe!!

Scooby Doo, where are you??

We had a follow-up appointment this morning with the pediatrician and Sól had gained ONE POUND since thursday!! We're thrilled to know that it IS in fact a supply issue and not something wrong with him.

On friday I got an electric pump and started pumping, measuring and supplementing with formula. I was alarmed to realize that I could only get 1 oz. per breast every 2 hours. We supplemented the other 2 oz. with formula and voilá! he gained weight. Poor little guy has been hungry and we didn't know it!! He's been so content it was hard to know that anything was wrong.

Anyway, the plan is to keep pumping for the next week to try to increase milk supply. I've also started taking Fenugreek to see if it will help. In the meantime we will continue to supplement and offer him at least 4 oz. at each feeding.

Thanks again for your prayers!!!! I'll keep you updated.

We are thrilled, overwhelmed and exhausted. I need a drink.

After almost 5 weeks Sol is still only a few ounces above his birth weight and our pediatrician is very concerned. Once again we've got the weekend to show some more weight gain and then go from there. I'm going to be pumping this weekend just to rule out the supply issue. (I'm pretty sure there's nothing wrong with supply, but we want to know for sure.) If he doesn't show significant weight gain by Monday then the doctor will start with blood tests and maybe an ultrasound to see what could be wrong. I would really appreciate your prayers for my little guy.

We Love Our Sling! 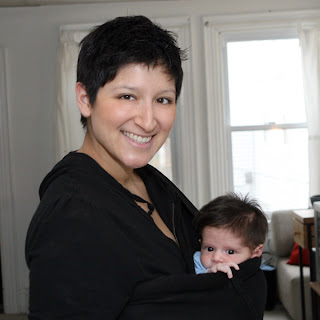 Sol's new favorite activity is riding in the sling during his awake time so he can peek out and see the world. When he gets tired of all the visual stimulation he can lay back and snooze in a cozy womb-like position. Thanks for the sling, sweetpea!!

We gained 2 ounces since Monday!!! Things are looking good. The zantac seems to be making a difference. 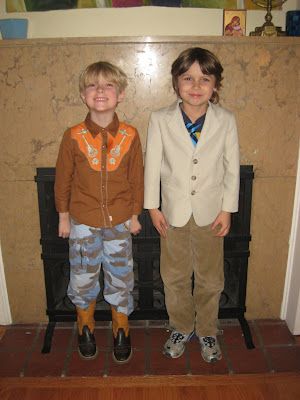 Two weeks ago this is what my boys put on to go eat Indian food. There really was nothing I could do about it. They thought they were dressed up. I thought they looked like nerds. **OF COURSE, I did not tell them that, but are they helping the home schooling stereotype??NO!!**

All of you hip mom's, whose kids are three and younger dress your kids in Gymboree, Gap, Hanna Andersson, Old Navy. Or maybe you are even hipper and your kid is dressed entirely off of Etsy. You make sure they are adorable and hip. They wear expensive, adorable shoes and they always look great. Sometimes greater then you. You go to the mall and are horrified by all those mismatched kids 4 and up. You think,"my kids will NEVER look like that!!" But they will. Wait and see. You will meet your husband at a restaurant and he will gawk at your children and you will say, "I tried." Because what you don't know is how tired you will be and that your kid will have strong preferences that you don't really want to fight, because you know you are going to be late and you finally have shoes on one of them while you are searching for the other kids shoes. He will want to wear his cowboy shirt with camos or clip his tie to his t-shirts. My hairdresser tells me Ethan looks like a foreigner from some Scandinavian country.

I know he does.

You think you can fight this crime of fashion, but you can't. You think you won't let them out of the house looking like...well, my boys, but YOU WILL.

So, he only gained half an ounce over the weekend and the lactation nurse and pediatrician both think that his lack of weight gain, choking and lack of bm's are all related to the reflux...so they've put him on zantac and we've got another checkup on wednesday. i've stopped pumping for now. it's a little frustating and confusing because he seems so content most of the day. he's not a fussy baby.

anyway, thanks for your encouraging words and prayers. we're doing fine other than that. we had a fun family bonding day yesterday just the three of us. 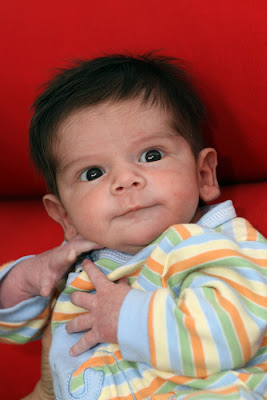 Sol is 3 weeks old today. The moms are gone and we're on our own!!

We had a discouraging visit to the pediatrician on friday. Sol has a bit of baby acid reflux and hasn't gained any weight in 2 weeks. We're also dealing with a little bit of constipation on top of that...I've started pumping to increase milk supply and we're going in tomorrow for a weight check.

I'm not too worried because for the most part he seems happy, but it was a little frustrating to hear that everything's not ok. He sleeps on his tummy now and that seems to have solved some of the discomfort of the reflux.

We're hoping we have a more positive report tomorrow. He's a good baby and he gets cuter every day. :)