Please check out www.journeytome.com and click on Public Journals. Click on 'Adrianna'. These are some friends of friends and they are in China right now picking up there adorable little girl. They have done a great job of taking pictures during their trip. It has been especially informative for me as I have been able to see what we can expect on our trip. I know you will like looking through their pics. 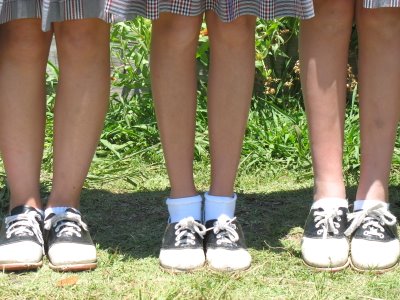 I wanted to get some shots of the saddles in their end-of-year stage....signed in sharpie and decorated with highlighters....but alas, my camera ran out of battery power today. I took this a couple of weeks ago.

I was in the Camper store the other day and they have some SUPER CUTE shoes this season. They aren't cheap, but they ARE super comfy. 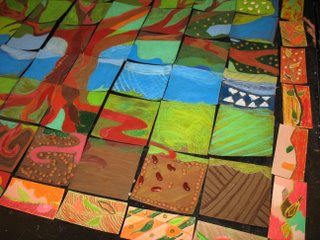 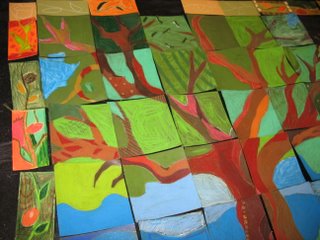 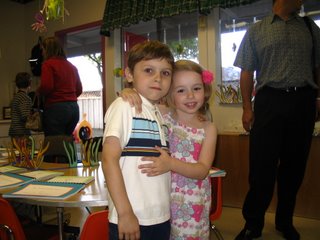 Last night was Sam's Open House for the end of his year in Pre-K. This is Lauren. Lauren is a cutie. 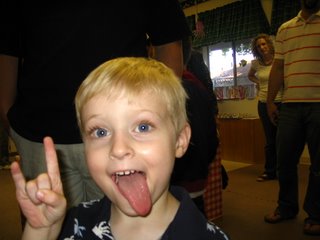 We gave Sam the camera to take pictures of his classmates, but we found this one of his brother, Ethan. This image has captured Ethan like none other has. 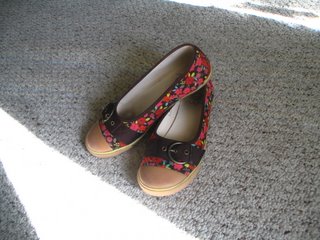 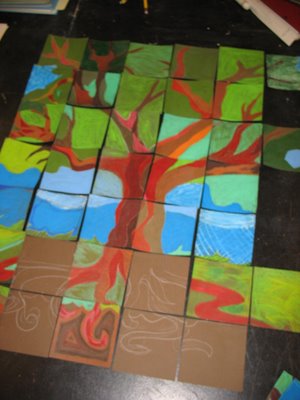 Please check out my new blog at www.journeytome.com. Click on 'Public Journals' and then 'Adrienne Mei'.

This site offers free web journaling to those who are adopting. The money raised from their 'Red Thread Adoption Boutique' helps support the site. 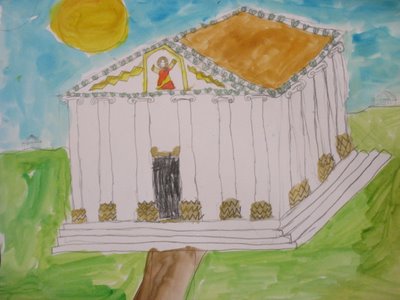 By a third grade student. 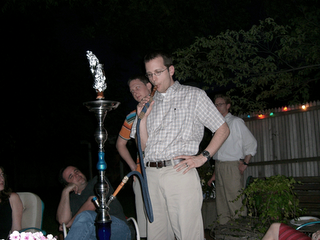 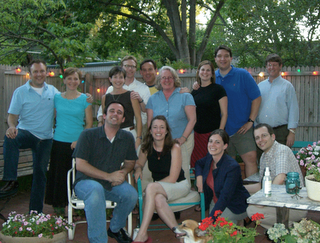 Husband and I enjoyed a lovely Friday evening with our small group from church.

As you can see, at one point our hosts broke out the hookah. A great time was had by all. 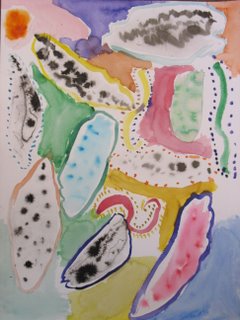 Watercolor and Ink painting by S., age seven. Inspired by the work of Wassily Kandinsky.

an immature desire to be hip,

an obsession with all things Indian,

a need to be twinkies with my best friend,

I know it is none of these things. (Well, maybe the Indian thing.)


I'm getting my nose pierced as soon as school is out. 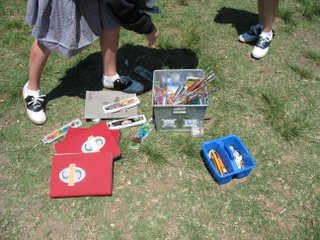 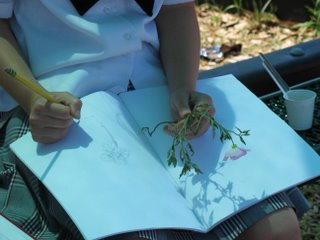 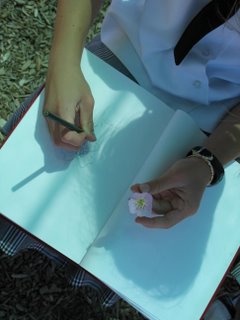 We're staying put. Husband applies for teaching positions all over, interviews all over, gets offers from all over, then my own little school pops up with a position just weeks ago. A position he's really excited about. So, we're staying.

Grieving not getting to move to the hill country a little.....But, lots to be thankful for--our families are nearby, we will remain in our dear school and church communities where we've put down roots. And though I often long for change and adventure, roots are good. Not to be taken lightly.

We stay. And Husband has already started studying what he will teach next year, before the ink on his master's diploma is dry. :) 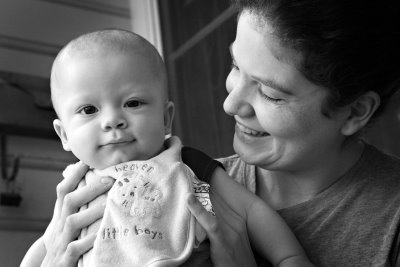 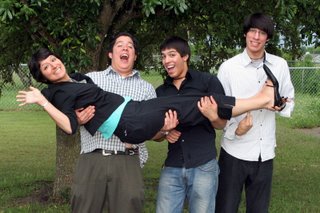 I'm back in Boston today after being in Texas for 2 weeks. My paternal grandfather died a couple of weeks ago and I was able to be with my family before, during and after the funeral. It was a sad, but sweet time with them. I was reminded how much I love my parents and my super cute brothers. AND I was able to visit sweetpea and see baby Thomas and his family.

I am thankful today for my beautiful family and for my awesome friends who totally and completely fit into the "family" category as well.

Overall it has been a nice weekend. We grilled out, drank a nice wine and I was given a nice gift by my family. But I should have known that there is no such thing as an idyllic day in motherhood. During church today the assistant in my 3-yr olds class came and got me saying that E. was complaining of a tummy ache. I should have seen right there what was coming, but I was naively determined to make our lunch out with friends. E. seemed ok and I assumed he was just hungry. By the end of the service his teacher brought him to me. Uh oh. He didn't look good. Church got out and I gave him a snack. He told me he was better and I, still hopeful, said great. A little while later we got in the car to drive to the restaurant. E. began to cough repeatedly. I began to think he was coming down with something, fast. We got to the restaurant and my anxiety over E. began to grow especially when his eyes began to grow red and puffy. This is when I thought, "oh, allergies." I gave him benadryl. I went outside with him to walk around while we waited for it to take affect waving to our friends as they walked in the restaurant to sit with my husband and 5-yr old. We had been outside about 10 minutes when yep, he vomited all over himself, me and the sidewalk. sigh. Lunch over. I never even sat down with our friends and I now could not enter the restaurant to say good-bye, because I was covered with vomit. Nice. So needless to say we left. As I was stripping E. and I in the parking lot I thought, "this is motherhood."

(E. does not have food allergies, but at times viruses cause him to have allergic reactions. Weird I know.)

So I'm thinking the much-hyped "marriage posts" will be a bit anticlimactic when I finally get to them. I haven't forgotten. I'm extremely busy with teaching and doing my business and being a wife and the both of us trying to make decisions about where we will be next year. We've made a decision, finally, and I'll let you know about it, soon, when it's official. Oh, and Husband finished his last final of graduate school this week and today started work at the bookstore to tide us over. And there's five years of classroom paraphernalia to sort and pack, 180 restless children to manage and teach, exams to prepare, give, and grade, inservice and......... 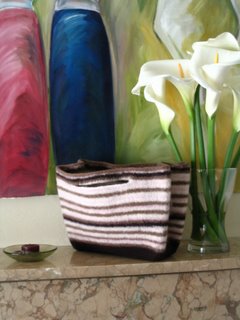 I wanted to show you my very first knitting project. It is a felted purse. I think felting something for your first project is a great way to start, because you will eventually hide all your beginner mistakes! I'm not at wedding girls level yet, but I am proud of my first attempt!

(Reuters) - "After three deadlines for a deal passed, the biggest of three Darfur rebel factions and the Sudanese government signed a peace agreement on Friday but two other rebel factions rejected the deal, casting doubt on whether it would be workable.
Here are some key facts on the Darfur crisis:

WHAT HAPPENED:
* Rebels in the vast region the size of France took up arms against the government in February 2003 saying the Sudanese government in Khartoum discriminated against mostly non-Arabs in Darfur.

* More than 2 million civilians, mostly subsistence farmers, have fled their homes to camps in Darfur and across the border into Chad to escape the fighting and raids by government-backed militias. The United States has called the violence genocide. The Sudanese government admits to arming some militias to quell the rebellion but denies links to Janjaweed militias accused of rape, murder and looting.

Did anyone see E.R. last night? The episode took place in Darfur.

NEW YORK - The nation's largest beverage distributors have agreed to halt nearly all soda sales to public schools, according to a deal announced Wednesday by the William J. Clinton Foundation.
Under the agreement, the companies have agreed to sell only water, unsweetened juice and low-fat milks to elementary and middle schools, said Jay Carson, a spokesman for former President Bill Clinton. Diet sodas would be sold only to high schools.
Cadbury Schweppes PLC, Coca-Cola Co., PepsiCo Inc. and the American Beverage Association have all signed onto the deal, Carson said, adding that the companies serve "the vast majority of schools."

School Days Are Almost Over. 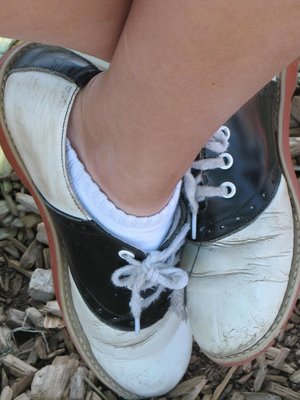 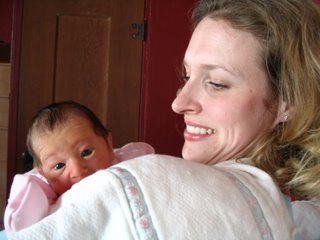 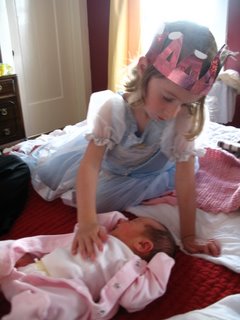 Here are two pictures of Lila Kate at home. In the first image Lila Kate was checking things out over my shoulder. The second image is of Eva Grace, Lila's big sister. Eva Grace prefers princess wear.