I'll be in texas in a little over 5 weeks! My sister-in-law is throwing me a baby shower and there are several friends and members of my family that will be driving/flying in for the occassion. I'm so excited!!! Maybe just maybe it'll be an unusually cool august?? 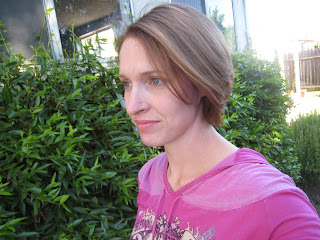 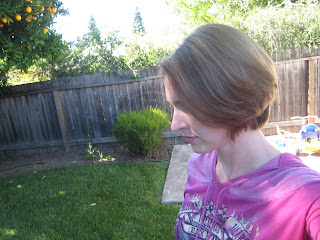 There's a Rumbly in my Tumbly

I've been able to feel little baby movements for almost 2 weeks now, but I've noticed just this week that his kicks and pokes have gotten stronger. I was thinking yesterday that I can't wait for Stephen to feel them, too. So, I was THRILLED when Stephen put his head on my tummy last night to talk to baby and try to hear him moving and all of a sudden Stephen got poked in the ear. It was a really fun moment for us. =) I'll be 19 weeks tomorrow.

Here's what my husband wrote to a friend about our newest favorite movie, which you should go see.

Lives of Others is well worth your time. It's a beautiful film about the power of art and love to re-humanize those whose culture has lost much of what makes it human. Thus, in many ways, its about the goodness of being and creation. I also saw an interview on Charlie Rose with the writer/director Florian Henckel von Donnersmarck (sp?). He's young (about 35?) and heavily influenced by his literary background. Consequently, the film has an artful coherence that makes it a good film to talk about with others. 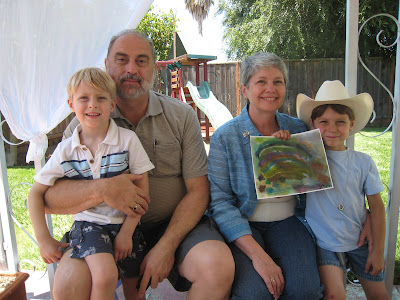 This past week, Andrew's parents were in town from Dallas. We spent a day in the city where the boys sported their new cowboy hats and Sam his new boots! 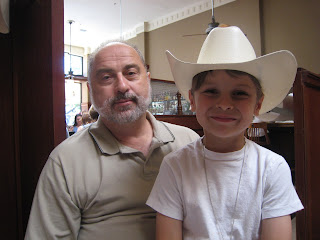 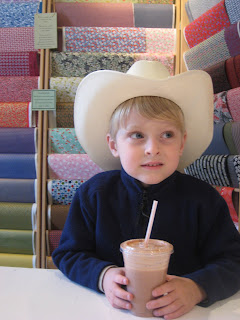 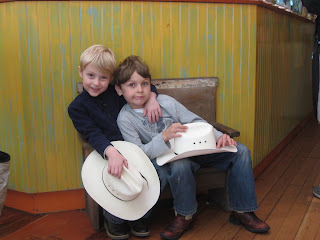 1. I'm really enjoying my new job. Other than making pictures, writing is the other thing I'm pretty comfortable with. (Yeah, I know, I ended that sentence with a preposition--oh, the irony.) Anyway, teaching writing has been very enjoyable so far. It works a different part of my brain. And my students, all of whom are Korean, by the way, are respectful and motivated. Apparently, my kids speak only Korean at home. (My friend Lisa tells me that the Korean community in our city is very traditional.) Because of this, they tend to struggle with grammar and writing skills--and vocabulary, too.

My favorite opening sentence of a student essay so far? "Television has been around for hundreds of years...."

2. The owner of a local art/crafting studio, the one that sponsored the "urban bazaar" I participated in Dec, emailed me and asked me if I would be interested in placing some of my artwork in her giftshop. Uh, seriously? And, she wants to make me a "featured designer" in the shop in the next few months. I'm totally honored and excited! And I need to get my booty in gear and make some things.

3. I got to hear Lauren Winner speak the other night at an arts conference. Michael actually was the one who attended the entire conference, but I got to sneak in for the Lauren Winner part. Even Michael is a fan--anyone who begins her memoir with an recount of her bourbon toast to Faulkner while sitting on his grave in Oxford has his vote. I may write a little more about this soon. She spoke briefly, but I liked what she said. Also, she was hilarious. 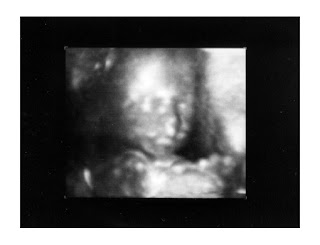 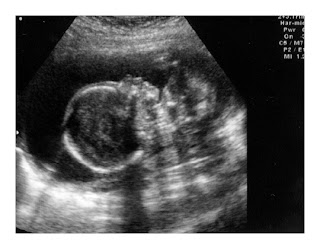 It was super cool to get a glimpse of our little one today. Ultrasound technology is simply amazing!! I saw his little toes and fingers and knees...it made me so happy. Baby wasn't shy and it was easy to see that he's a he. =)

The Dr. said he looks healthy and that's all we needed to hear. We're so excited!!

I've always thought that ultrasound photos are a little weird looking. I have to say that it's way more fun to see the actual moving baby on the screen.

I've always slept better on my back, but I'm told that sleeping on my back after 4 month cuts off blood flow for the baby. I'm having a hard time sleeping peacefully on my side, though. I have a pillow for my arms and a pillow between my legs, but it only helps a little. I wake up with a back ache every morning. I'm tempted to try a c-shaped pregnancy pillow, but my mother-in-law warned that it would take up too much space in the bed and it would make me hot this summer. I'm wondering if anyone has any suggestions...Last night I ended up on the couch propped up with pillows in a reclined position. Not a bad solution, but I'd rather be in my own bed. 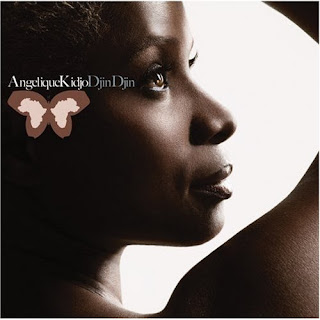 Have y'all heard this new album by Angelique Kidjo? She's from Benin, Africa and the music is lovely. The album features Peter Gabriel, Alicia Keyes, Carlos Santana, Joss Stone and more. Also, Kidjo is a UNICEF goodwill ambassador and will be featured in Vanity Fair's upcoming Africa issue. My favorite song is "Salala." 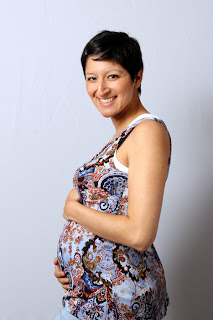 16 weeks (almost 17) and gettin' bigger all the time. I heard the baby's heartbeat on Monday for the second time. That was nice. Also, I'm pretty sure that I felt the little one movin' around last night while I was trying to fall asleep. So fun! It wasn't anything like I've felt before. Just a little light fluttering.

I'd like to give a huge THANK YOU to Kellsey for sending me a box of super cute maternity clothes. Nancy has also offered and been a great resource for info. Thanks, y'all!!

Here's a self-portrait at 16 weeks wearing one of Kellsey's tops. Turns out that my butt is pregnant, too. =)

Well, I'm doing it. A friend of mine, KT has asked me to join her in training for a 5K and eventually bigger races. I decided to go for it. I bought some new shoes, looked up training schedules (called the couch potato-to-5K) and this morning we met at 6am and completed our first training session. It was great!! I stopped by and picked up my favorite coffee on the way home and I feel so energized, almost hyper. Weird.

If you knew me you would know how out of my comfort zone this is for me, but KT is the perfect person to do this with. She is very relaxed and non-assuming. We both have sciatica so we have said our team name should be Team Sciatica, but I'm not sure that really works. 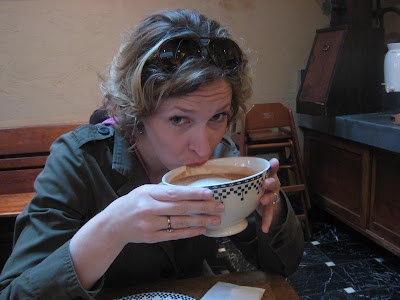 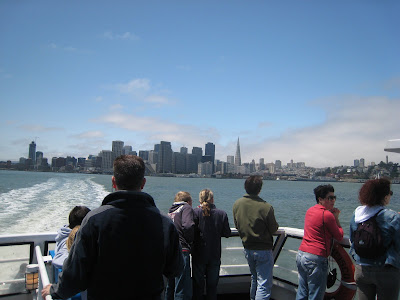 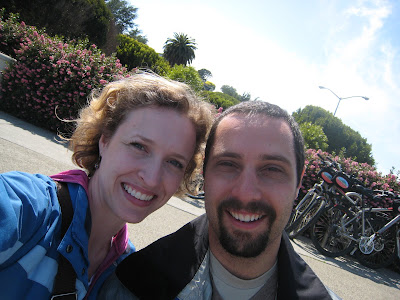 Here are some pictures from our 10th anniversary get-a-way to San Francisco. It was cloudy and cold, but we had a great time. We drank grande sized mochas, explored Cow Hollow and Pacific Heights, rode a ferry to Sausalito, ate yummy southern food at the Elite Cafe, indulged in chocolate at a Chocolate cafe called Bittersweet, held hands in happy silence and overall had a sweet time.