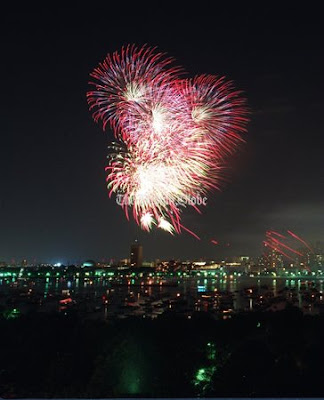 I have to say that Boston is a super cool place to be on the 4th of July. It's such a big deal. We no longer live right on the Charles river with front row seats to the spectacular 30 minute fireworks show, but as we found out last night it's just as good of a show from 2 miles away up on Bunker Hill.

I hope y'all had a nice day with family and friends. Do any of you have 4th of July family traditions? Cookouts? Sparklers? Since we lived outside of the city limits growing up in Waco, Tx, my brothers used to put on their own fireworks display. Those were good days...

Comments:
we don't really have any 4th traditions, but the 3rd is my mom's b-day so we usually have a party on the 3rd instead. This year, we all met at my parents' barn ( a barn that was originally built in the early 1800's up in New York state). They had it taken down and reconstructed using the original hemlock structure, and they had a lot of the old wood planking from the outside of it milled and used to make the floors in their new house (which is separate from the barn). Anyways, it was very fun to all gather with all 6 of the grandkids at the barn (which now has two bedrooms, each of which has a large loft area). We partied for mom's bday and then my hubby, son and daughter and I all slept there overnight with my parents. It was very much fun.