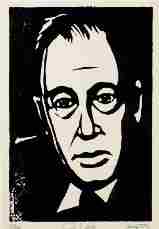 The anniversary of the death of C.S. Lewis was yesterday--the same day JFK was shot, in fact. Known by my husband as "Saint Clive's Day." I just finished Perelandra recently. I love it when it's been so long since you read something that you can't remember that much about it, only that you loved it! Anyway, I thoroughly enjoyed it....but I have to say that now that I've finished it, I still count the final book of the trilogy as my favorite---That Hideous Strength. I think it's how the supernatural, archetypal world descends on ordinary, damp, grey England that makes me really love it....the invisible world breaks into the visible one. (The first two books take place on other planets.)

Comments:
I was hoping you'd bring back up That Hideous Strength. I've been slogging through it, and now that I'm trying, I think I might have given up last time. I am going to take it on my vacation this weekend with the hope that if I read it when I'm not falling asleep tired, I will enjoy it more. I WANT to like it!

I just finished Perelandra, too! I love it. I have actually never finished the other two, but I bought That Hideous Strength recently at a bookstore for 50 cents. Yay for used bookstores!!

lindsay--the first time i tried to read THS i didn't make it thru, either. i think it starts off a little slow or something. and the tone of the book is so different from the first two books--i think i was disappointed. but when i tried it again a few years later, it ended being my favorite one. so, if you're up for it, push through for awhile and it may get better!!! :) yay for the space trilogy.